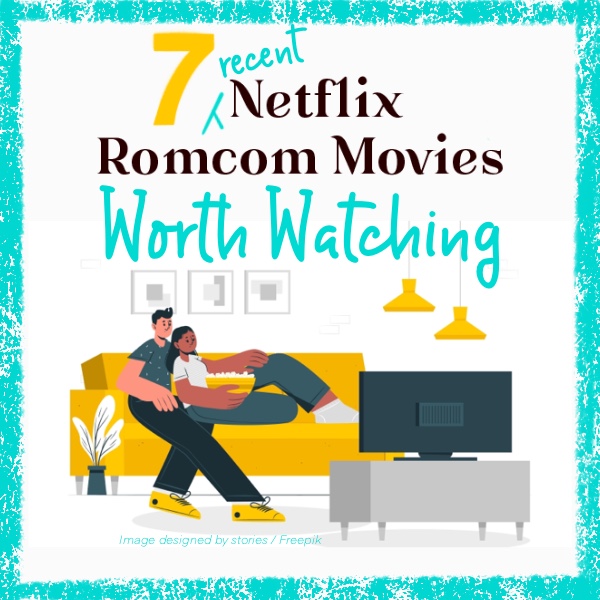 (and as a bonus there are 4 romcom series you can watch too!)

There is an abundance of articles on the internet about favourite romcoms, but when you check them out, so many of the recommended movies are REALLY old! And yes, I’m guilty of recommending old movies, myself. In my blog post 7 Uplifting Romcoms to Warm the Heart, I even included one from 1957! Does that mean there are no decent romcoms being made? No! Here’s a list of seven Netflix romcoms made within the past few years that I can recommend (in no particular order).

Disclaimer: I watch Netflix in Australia, and at the time of publishing this post in March 2021, these titles are all still available. Netflix is region-based, so your region may not have all these titles.

When strangers, Sloane and Jackson meet at a shopping mall one Christmas, they discover they share a mutual hatred of the holiday season due to the pressures imposed on them by friends and family because they’re still single. As they both agree they’re not attracted to one another, they become each other’s plus one for all future holidays, with no strings attached.

Although this Netflix romcom didn’t receive rave reviews on IMDB or Rotten Tomatoes, I thoroughly enjoyed it. There was some good chemistry between the two lead characters and some genuinely amusing moments, not to mention some raunchy dialogue to spice things up. Of course you know the two will end up together, and the ending is rather a romcom cliché but it’s uplifting and fun all the same. Definitely worth a watch.

Hayley and Roberto are getting married in an amazing Italian palazzo. As Hayley’s parents are dead, she asks her brother, Jack, to walk her down the aisle and ensure the day goes smoothly. But when Marc, one of Hayley’s old school classmates, turns up uninvited to persuade Hayley to ditch Roberto and run away with him, Jack realises his task will not be easy.

Another film that didn’t do so well with the critics, but the Italian settings are gorgeous. Overall, I found it funny and entertaining. The real romance plot involves Jack and a friend of Hayley’s who he met by chance a few years earlier and hadn’t seen until she turns up for Hayley’s wedding. Unfortunately, his ex-girlfriend also turns up to cause havoc. Whilst the plot is quite farcical, it’s all good fun. If you’re a fan of the Poldark TV series, you’ll recognise Eleanor Tomlinson and Jack Farthing.

Annie’s boyfriend Duncan has a musical obsession with a once popular singer-songwriter Tucker Crowe, who disappeared off the music scene many years earlier. Duncan’s obsession absorbs all his waking hours when he’s not working, leaving Annie, understandably, feeling neglected. Duncan, however, resents the fact Annie doesn’t share his passion. Things change when she opens an envelope addressed to Duncan and finds a demo cd containing some never heard of Tucker Crowe songs, and posts a scathing review on Duncan’s fan website.

I didn’t know what to expect with this movie, having not read the synopsis before watching it. But overall, I found it a delight with outstanding performances from all the principal characters. Ethan Hawke as Tucker Crowe reminded me a little of Kris Kristofferson in the 1976 version of “A Star Is Born”.

This is an Australian movie set in the spectacular Northern Territory and the Tiwi Islands. Lauren and Ned have just ten days to find Lauren’s mother, reunite her parents, and get married.

This movie is just sheer escapist fun in an amazing setting with quirky characters. I live in Australia but I’ve never been to the Northern Territory. After watching this movie, I wanted to pack my bags and go there. Fans of British police drama series will recognise Dan Collins from “Midsomer Murders” and Huw Higginson from “The Bill”

When Gabriela wins an idyllic-looking inn in New Zealand, she decides it’s the life change she needs after just losing her job and ending her relationship. She packs up and leaves her home in San Francisco and heads across the world to her new life in New Zealand. Unfortunately, she finds a crumbling property nothing like the chocolate box image on the competition website. Gabriela enlists handsome contractor, Jake, to help her renovate the property so she can flip it and return to the States.

For a couple of hours of light-hearted, escapist fun, you can’t go far wrong with this movie set in stunning New Zealand. Adam Demos, as Jake, is a likeable, worthy hero for Christina Milian’s Gabriela. Fun fact, Adam Demos, who’s really Australian, cut his acting teeth on the same long running Aussie soap, Home and Away, as Luke Bracey from “Holidate”. Other notable Australian actors to have worked on Home and Away early in their careers include Heath Ledger, Isla Fisher, Guy Pearce, Chris Hemsworth and Naomi Watts.

Harper and Charlie are overworked executive assistants to two high-powered, demanding, workaholic bosses. To make their lives more bearable, they hatch a plan to bring their bosses together romantically, hoping it will give their bosses something other than work to think about. And, as this is a romantic comedy, the growing attraction between Harper and Charlie develops into something more.

I thought this Netflix romcom was witty and enjoyable. There was plenty of chemistry between the two main characters. There were some romcom clichés, but it had all the right ingredients for a satisfying romance.

After 986 unsuccessful dates, Nick sues the dating agency and hires struggling lawyer, Susan, to represent him. But as the case develops, the couple realise their feelings for one another are growing.

This is another Netflix romcom I started watching with no prior expectations and thoroughly enjoyed. It captures the genre brilliantly. The leading characters have plenty of chemistry and charm. The dialogue is witty, and the romance tugs the heartstrings in all the right places. If you’ve ever tried internet dating, you’ll probably relate to Susan’s experiences after Susan admits to her colleagues that she’s never used an internet dating agency and they insist she has to try it out… for the case, of course!

When Emily’s boss in Chicago discovers she’s pregnant, she sends Emily in her place to work as a social media advisor to a marketing firm in Paris. Unfortunately, Emily doesn’t speak a word of French, which doesn’t go down well with her ultra-chic Parisian boss.

Okay, this series has many flaws. I’ve lived in Paris and the people are not at all how they’re portrayed in this series. In fact, I can imagine this series would seriously annoy many Parisians. It always makes me laugh in movieland when a character gets in a taxi at an airport and gets taken past every major landmark to reach their hotel! Also, I’d love to know Emily’s bag packing secrets. She has such a wide variety of clothes, hats, handbags and shoes and yet she arrives in Paris with just two suitcases and a few bags! But for pure fantasy, escapist fun, I enjoyed watching Emily in Paris and look forward to the second series.

When Dylan discovers he has chlamydia, he sets out to alert all his previous partners.

I loved this series. It doesn’t sound very romantic, but it’s a brilliant series about friendship and love. As Dylan revisits his past, he learns a lot about himself and the importance of good friends. Dylan is scruffy, awkward and very endearing! Played by Johnny Flynn, who you may have seen in period dramas such as “Vanity Fair” and the recent movie version of Jane Austen’s “Emma”

Over one Christmas, Dash and Lily get acquainted through a notebook, planted at various locations in New York City. Through the notebook, they share their thoughts and dreams and set each other a series of dares.

I initially didn’t watch this series as I thought it would be more for a teenage audience, but I’m so glad I gave it a go. I found it utterly charming. It’s beautifully acted, and refreshingly original.

I haven’t yet watched the second series of this French romcom set in Paris, but the first was a lot of fun. This movie presents a more realistic picture of Paris than in Emily in Paris.

To help Elsa get over her ex, her friends hire a good-looking escort to pose as a potential boyfriend. Their plan works better than expected until Elsa discovers the truth.

I hope you enjoyed this round up of movies and shows to watch on Netflix. Here are some more posts you may enjoy.

No pins found from this username: vhoneywood and board: diy-craft-useful-hacks

We use cookies to ensure that we give you the best experience on our website. If you continue to stay on this site, we assume you are happy with that.Ok