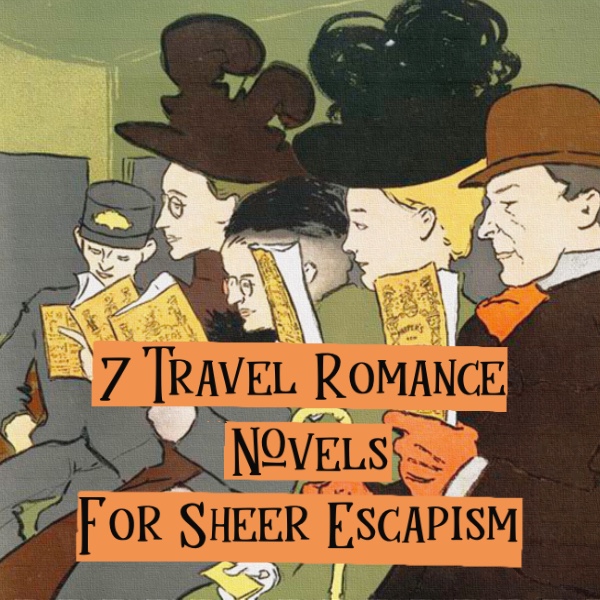 I love travelling and I love romance books. The combination of the two is, therefore, one of my favourite types of reading material. There’s nothing like experiencing a new country even if it’s through a cast of fictional characters. And, with travel being impossible for many of us at the moment, we need armchair travel more than ever! So I’ve put together this list of 7 travel romance novels to whisk you away to magical foreign lands.

I love this quote from the book I’m currently reading (see That Night in Paris below!).

…the traveller embraces the differences of each new location and the tourist bitches and moans about them, often incessantly.

Art Historian, Aurora Black travels to Paris to work at an art auction house to establish if an illuminated manuscript is authentic. She comes up against Cédric Castel, an audacious journalist. Cédric is out to prove that Aurora has been hired for less ethical reasons.
They end up on an adventurous journey across France battling rogue antique dealers and personal demons all the while trying to fight the growing attraction they have for one another.

Becky works at “It’s a Wrap”, her sister’s sandwich making business. But, unknown to her sister, Becky has invented some imaginative and popular fillings for the sandwiches and wraps, thanks to her talent for linking ingredients that work together. Her input has saved the business from financial disaster. But Becky’s not content. She feels life is passing her by plus her sister treats her appallingly. So, when the opportunity arises to house-sit a luxurious villa on the Greek island of Corfu, Becky jumps at the chance. And, if her sister won’t give her time off, she’s even prepared to sacrifice her job.
The journey to the villa is more eventful than Becky anticipates. Her first plane is late arriving in Athens and she misses the connection and has to stay overnight. Then the weather causes her flight to Corfu to be diverted to another Greek island. But, she’s not alone. Also travelling to Corfu is her London-Athens seat companion Elias, a London-based Greek lawyer. Eventually Becky reaches the villa with Petra, another traveller she met on the journey, in tow, but discovers that a menagerie of animals have taken up residence in the villa. So begins her Greek adventure!

The Invitation by Belinda Alexandra

Set at the turn of the twentieth century in the Belle Epoque of Paris and the Gilded Age of New York.
Emma Lacasse is a writer and harpist in Paris during the Belle Epoque. She leads a bohemian lifestyle with her lover, artist, Claude and their collection of friends, but she’s also heavily in debt after paying her grandmother’s medical expenses. In danger of losing her home, she contacts her sister in New York and appeals to her to lend her some money. Her sister is married to one of the wealthiest men in New York, but the siblings have been estranged for nearly twenty years.
Her sister agrees to help her on condition that Emma travels to New York to help her shy daughter, Isadora, prepare for her society debut. Emma has no option but to accept.
In New York Emma discovers her sister’s life is one of luxurious opulence and unimaginable excess but by contrast, Emma is introduced to the other side of New York, one of extreme poverty and hardship. And lurking beneath the glittering New York society she discovers a web of lies, deceit and moral corruption.

The Other Wives Club by Shari Low

A hilarious fast paced comedy.
Drew Gold is celebrating his fiftieth birthday so decides to take his family on a luxurious Mediterranean cruise but, unknown to Tess, his wife, he’s also invited his two former wives, Sarah and Mona. What could go wrong?

That Night in Paris by Sandy Barker

After having drunken sex with her flatmate, Cat decides she has to escape before he gets the wrong idea and thinks she wants a relationship. After a bad break up ten years earlier, she’s no intention of going down that path again. She books a fourteen day coach tour around Europe. On the trip she makes new friends, drinks lots of wine and visits some amazing places… and a chance encounter with an old friend stirs up buried emotions.

Summer at Sea by Beth Labonte

Funny and heart-warming!
Summer Hartwell, a twenty-something school librarian who still lives with her parents, is forced to join them on a week-long cruise to Bermuda paid for by her brother. As well as the torture of being stuck on a cruise with her anxiety-ridden parents, she also has to put up with Graham, her brother’s best friend and once the cause of a heart-crushing event. But despite the drawbacks, Summer recognises that the cruise provides a great opportunity to break free of her clingy, multi-phobic parents. Somewhere on a ship with two thousand people she’ll find her future husband.
But Graham doesn’t believe Summer needs a husband to break free of her parents. She just needs to stand up to them and start to embrace life.

Another cruise story – this time a short story.

Angie Silverton embarks on a well-deserved cruise with her husband, Gil, only to run into Selina on board. Selina is her once best friend, now sworn enemy after she stole Zander, the love of Angie’s life. When Gil is stricken with seasickness, Angie goes onshore in Malaga by herself to do some shopping but when she misses the boat’s departure she finds herself stranded with Selina. The two women are forced together for three days while they catch up with the ship. Are they able to settle their differences?