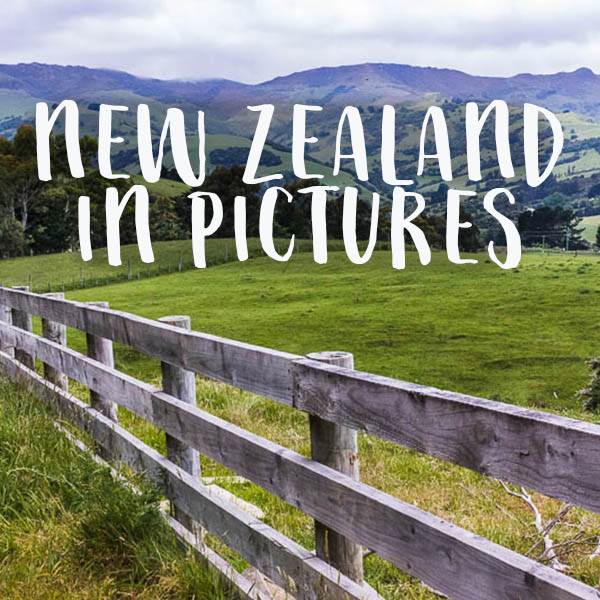 New Zealand is one of the most stunningly beautiful countries I’ve visited with its craggy mountains and glaciers in the South Island and boiling geysers and rolling hills of the North Island.

Our trip to New Zealand, in early summer, was my first but Peter had been a couple of times before. We decided to see as much as possible by hiring a camper van for the duration of our trip, another first for me (see below for an image of me at the wheel). The camper van itself was a disappointment as it was a lot older and shabbier than we’d expected but even though it had its problems it didn’t break down on us and was a great way to see New Zealand.

The landscape was awash with wildflowers which made the stunning scenery even more breathtaking.

After picking up our camper van in Christchurch we headed south-east towards Akaroa and I was given a hint of the scenery that awaited us.

This tree, on Lake Wanaka, must be one of the most photographed trees in New Zealand. Google “Wanaka Tree” or #wanakatree on Instagram to see how many different images come up.

Cadrona is a small hamlet in the valley between Queenstown and Wanaka and close to the Cadrona Alpine Resort, a popular winter sports region. The Cadrona Hotel is one of the oldest hotels in New Zealand and is a reminder of the area’s gold rush past.

Just past the hotel I noticed a fence covered with strips of fabric. On a closer look it turned out these were bras tied to the fence. There must have been about a thousand bras flapping in the breeze! Back at home (otherwise known as crappy van) I did some research and discovered this bizarre exhibit began back in the late 1990s.

Over the years there have been several unsuccessful attempts to have the bras permanently removed but at least now they’re doing some good. As well as providing a quirky tourist attraction, they’re helping raise money for breast cancer research.

A great way to experience Milford Sound in the Fiordlands of the South Island is by boat. The tall dark cliffs, carved out by glaciers during the Ice Age, are awe-inspiring from the deck of a boat. I haven’t been to Norway but I imagine it would be a little like Milford Sound. To add to the excitement, the captain of our boat decided we weren’t close enough to the forbidding cliffs and nudged the bow into the spray of a cascading waterfall. “Legend dictates if you get wet under this waterfall you’ll never grow old,” he promised.

We caught the ferry from the South Island to Wellington via the beautiful Queen Charlotte Sound. After we’d drawn breath, and changed our van (third and reverse gears had given up on us by this stage) we headed east to Napier. Devastated in 1931 by a major earthquake, the town was rapidly rebuilt and now has what’s arguably the world’s most complete collection of Art Deco architecture.

Heading north-west we skirted Lake Taupo, the largest lake in New Zealand towards Rotorua. You can tell you’re getting close to Rotorua by the clouds of steam billowing from the ground by the side of the road and the faint smell of sulphur that clings to the air. Peter had been raving about the Rotorua museum so it was disappointing to discover it was closed indefinitely having failed earthquake safety standard assessments. Instead, we visited the Te Puia Maori Village which provided a great insight into the Maori culture and brought us close up to the Pohutu geyser and boiling mud pools. Our Maori guide kept referring to us as “my family” highlighting the importance of the family in their culture.

Of course, as we were in the North Island we had to visit Hobbiton, close to Rotorua and see the little Hobbit houses. Located on staggeringly beautiful farmland, the set was dismantled when filming for the Lord of the Rings trilogy ended and had to be rebuilt for The Hobbit. The owner of the farmland agreed to the use of his land on condition that a permanent site be constructed. Now the owner runs Hobbiton in partnership with Peter Jackson who directed The Lord of the Rings trilogy and The Hobbit.

Would I recommend travelling through New Zealand in a camper van? If the thought of driving on the left, steep climbs, hairpin bends and parking large vehicles doesn’t bother you then yes, I’d definitely recommend it. The roads are good and, other than in Auckland, we didn’t meet any heavy traffic. Acquaint yourself with the traffic rules before you set off. There are plenty of traffic police waiting to pull you over! We were stopped on our first day, by a very friendly policeman, for crossing the road’s centre line while going round a bend.

Here’s a picture of me at the wheel of the camper van beast and a photo of it parked by beautiful Lake Hawea.

If you’re not daunted by the driving then a camper van is a great way to see the country. We were lucky with the weather but if it’s not good you can just pull up in a stunning location, make yourself a cup of tea or coffee and relax with a book. Bliss! (Full disclosure: we weren’t travelling with children!)

I can’t wait to return.

By the time we left New Zealand we’d clocked up over two thousand kilometers, taken several thousand photos and gathered some amazing memories and yet there is still so much more to see.

You May Also Enjoy…